Chefs Table: Reeling in the fish

It’s summer. Barbecue season is upon us and there’s nothing that tastes better than a meal outdoors while enjoying nature.

Steak has always been king. However, over the past 20 years, restaurant diners and home cooks have developed more sophisticated palates and are open to grilling a diverse array of foods from pizza and artichokes to tofu and dessert cakes.

However, land-locked Albertans remain oddly nervous about grilling seafood, a lighter option instead of red meat or chicken. To discover more about the seafood scene, the Gazette picked the brain of experts Rob Tryon of St. Albert-based Effing Seafoods and his chef, Robbie Oram.

“It’s not just Albertans. It’s people on the West Coast, too. Cooking fish is a premium thing, so you don’t want to spend all that money and not have it work out,” said Tryon.

He encourages cooks to have confidence in their preparation.

“You’ve all cooked steak. Treat it like a steak,” Tryon said, adding that cooking time depends on the fish’s thickness.

“Cook it to an internal temperature of 140 Fahrenheit. Use a meat thermometer. Everyone’s grill cooks at a different temperature. I use a digital thermometer with a probe.”

Lately there’s been an uptick in the demand for seafood. Popular dietary benefits of eating fish, televised cooking shows and the growing vogue for tasting chic raw seafood dishes from poke to sushi to ceviche (raw fish marinated in citrus) are pushing chefs and restaurateurs to up their game.

Tryon, a self-described “fisherman” is on a personal mission to not only sell, but promote and educate the public about eating high quality, sustainably caught fish populations.

In working towards broadening local palates, at any given time Tryon sells up to 60 different types of fresh fish and shellfish. He sources them from the West Coast, East Coast, Boston, Iceland, New Zealand and the Philippines.

“We don’t know what we’ll have. We have to be very flexible in what fishermen bring in and what we have to offer,” said Tryon.

Traceability is crucial to maintaining healthy fish stocks and it is one of Effing Seafoods primary goals. On the day the Gazette visited the shop, a fresh New Zealand moonfish arrived from the airport. The box contained printed information from its source including the name of the boat that caught it.

Tryon grew up in Victoria. His dad was a fisherman and he remembers that, even as a kid, he was tasked with cutting and canning salmon. 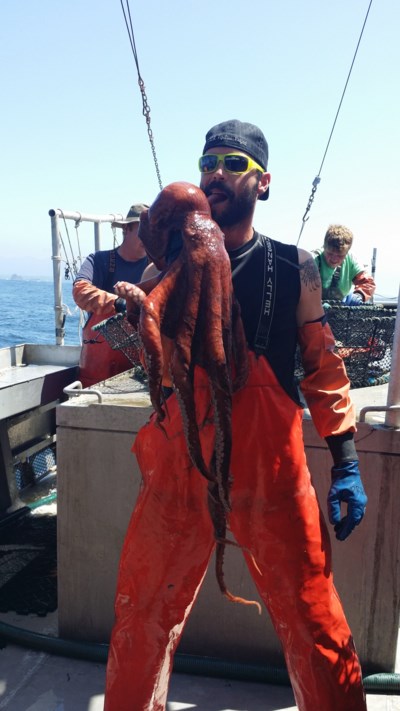 Rob Tryon, of St. Albert-based Effing Seafoods, is originally a Barkley Sound fisherman that has introduced an unprecedented variety of fish to the region through contacts on Vancouver Island, the East Coast, New Zealand and Iceland.

Growing up on the West Coast in a fishing community, he was essentially connected to the marine ecosystem where everyone recognized and understood the incredibly important life cycle of responsible fishing practices.

Proud of his heritage, the six-foot four fisherman said, “I’m born and bred to the lifestyle. I even have an oyster tattoo on my arm.”

During summer months while studying science at the University of Victoria, and Fisheries and Aquaculture at Vancouver Island University, he would rise at 4 a.m. to catch spot prawns.

Wanting to diversify from seafood, the family started a shellfish farm at Effingham Inlet near Barkley Sound south of Tofino.

Tryon spent 11 years working the shellfish farm but by 2013, he needed a break from the ocean and moved to Alberta where northern oilfields attracted an influx of individuals eager to work.

And the strenuous pipeline work paid well. As a labourer he was paid four times what a fisherman made. But his dream was to own a fish shop-restaurant mix with a sustainable seafood policy similar to Codfathers Seafood Market in Kelowna.

“But I concluded I’d be an oilfield guy all my life. So, I applied as an apprentice pipefitter, and poof, I was laid off.”

Unsure what the next step was, Tryon made a road trip to Vancouver Island to visit his daughters. By the time he reached Valemont, the aspiring entrepreneur made his decision.

Once on the island, he met with trusted suppliers, bought a trailer and freezer, and ordered product. Back in Alberta, he started a Facebook account titled Effing Rob and connected with anyone he could think of in the seafood industry.

“It snowballed from there. It was a crapshoot, but I had to believe in myself. I decided to go to farmers markets and at the same time I met chefs. Chefs are often competitive about new ideas, but they were telling friends and setting up dates with them.”

One of the first chefs to promote Effing Seafoods was Robbie Oram, also a strong supporter of cooking sustainably sourced foods. Raised in Labrador, Oram grew up in the mining town of Wabush, a 20-minute drive to the Quebec border.

In the town of 5,000, winters were spent playing hockey and volleyball. Summers usually meant a visit to grandparents living in Newfoundland.

“When I was 18, I wanted to get out. I did what every guy from Newfoundland does. I came to Alberta,” said Oram.

In 2003, while working a labouring job, Oram would cook dinner for his then-girlfriend and her parents.

“At that time the Food Network was starting to take off and I had so much fun watching it, my mom and girlfriend suggested I apply for a culinary program.”

Taking their advice, he applied to a two-year SAIT program and was accepted.

“I really got thrown in. It’s a difficult career and you really have to be passionate to stay in.”

He followed up with a two-year apprenticeship at Calgary's La Chaumiere, a high-end restaurant that served Old World French cuisine with a Canadian influence.

“It was 14-hour days, six days a week. You were paid minimum wage and at that time it was $8 an hour. It was a tough kitchen, but I learned so much from that place and I learned to take pride in what I did.”

Eager for a different experience, he landed a job as a sous chef at Opus on 8th. One night, during his day off, he received a secretive phone call from a co-worker asking him to cook that night.

Upon his arrival, the dance club was closed. Oram discovered Gord Downie and The Tragically Hip (in Calgary for several concerts) were being served a private dinner.

“They were awesome. Gord stayed more to himself, but John, his drummer was great. He was always accommodating, giving us backstage passes. It was cool to see how the other half lives.”

After his stint at Opus, Oram was hired by Spencer Gray Consulting to cook for the Canadian Embassy throughout the 2008 Beijing Olympic Games.

“We were opening a western-style restaurant ahead of the Beijing Games. Coming from a town of 5,000 to 15 million, it was a real culture shock. Most difficult was not knowing the language. Mandarin is one of the hardest languages to learn.”

Upon returning to Canada, Oram settled in Edmonton working a stint at Mercer Tavern. While working at Mercer, he spotted Tryon’s Facebook post and was the second person to support the Effing Seafoods venture.

“The product was so different from other suppliers and his (Tryon) knowledge comes from every step along the line where fish is caught,” said Oram.

However, before joining the Effing Seafoods family, Oram freelanced one summer preparing meals for celebrity comedian Martin Short at his Muskoka cottage. The cottage property actually consisted of a main house with two kitchens, two houses for guests and a cook shack.

“Martin lived at his cottage and he would bring in different guests – Steve Martin, Eugene Levy, Paul Schaffer and Paul Rudd.”

Oram came on board Effing Seafoods three months ago, and already his skills are being praised by the community.

For Father’s Day, Oram created a meal package for four that contained four Atlantic lobsters, 4 lbs. of Manilla clams, four Andouille sausages from Meuwly’s, 2 lbs. of potatoes, four ears of corn and two lemons for $29.99. Tryon did a spot on Global TV about the package and by the time he returned to the shop, a lineup was waiting outside the door. Oram had initially planned 100 packages, but the shop sold 179.

Oram has also started serving poke bowls every Friday for lunch. Each week varies. It could be salmon on a bed of rice, tuna and veggies, sushi or ceviche. It all depends on the daily catch. He’s also creating dry spice rubs and marinades.

As Tryon explains the philosophy of the business, he said, “My goal is to get people to try different fish. I’ve been pleasantly surprised by the feedback. People love it.”

He isn’t kidding. Alley Kat Brewery hosted an oyster and beer night. The event was quite successful and in gratitude, the owner created a small batch of limited quantity beer titled Effing Saison. Cheers!

1 ½ lbs. fresh Mahi Mahi cut into 1-inch pieces. (Can use Ono or Monchong)

3 Tbsp. cilantro (chop and reserve a few leaves for garnish)

• Place fish in a non-reactive container such as glass or a zip-lock bag. Pour marinade over fish and mix until fully coated.

• Cover and place in refrigerator for 30 minutes. Meanwhile soak wooden skewers in water so they do not burn on grill.

• Make sure grill is clean and spray with a non-stick cooking spray so the fish doesn’t stick. Set grill at 350 F.

• The key is to let the fish cook and not move it around. You should only flip it once. This will ensure marinade remains on the fish, not the grill.

• Cook to an internal temperature of 140 F or approximately five minutes per side until fish is cooked through.

• After taking fish off grill, lightly season with salt and garnish with cilantro.

About the Author: Anna Borowiecki