After a five-day slow-roll along northern Alberta highways, including three days along routes affecting regional motorists, a giant-sized industrial vessel is expected to reach its destination at site north of Fort McMurray today.

Motorists on regional highways have had to deal with a big slow-down over the last week as a giant-sized industrial vessel left an Edmonton-area manufacturing company on January 26 and was hauled to its home at an industrial site north of Edmonton. The vessel, called an evaporator, weighs 820 metric tonnes, and is used to treat water for oil sand steam generators.

Thought it would be bigger

The massive pressure vessel, however, wasn't a massive as first predicted. Billed as a 96-metre long piece of equipment, Alberta Transportation officials told the Lac La Biche POST on Friday that it was actually a 63 metre-long piece of equipment. A series of pulling and pushing tractor trailer units did create a chain of more than 100 metres.

The convoy was in Radway on last Wednesday night, rolling north on Highway 55 through Grassland and up to Atmore and Highway 63 on Friday afternoon. The load was expected to overnight at the May Tower Rest area on Friday night before taking the final leg of the trip on today.

While the week-long trek affected traffic along the route, as the top speed of the convoy was less than 50 kmh, area police said they had no major issues with the move. In the Lac La Biche area, traffic levels increased as many motorists detoured to use Highway 881 instead of 63. Local RCMP say they had no significant traffic issues to deal with.

Lac La Biche POST reporter Mahroh Afzal was in Grassland on Thursday to capture the giant convoy as it passed by on its way north on Highway 63. She files photos and a video of the massive haul. 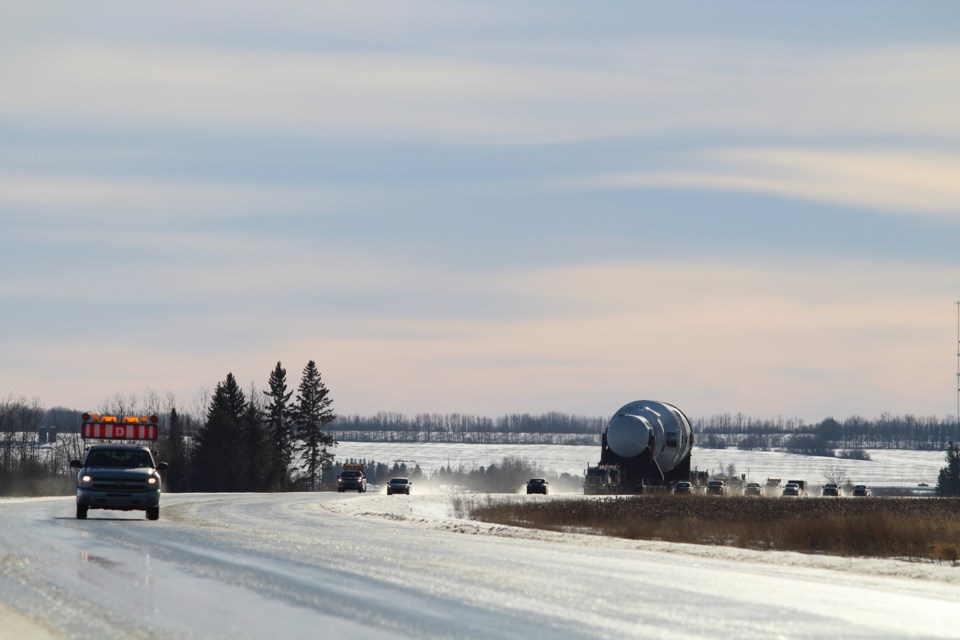 MNA celebrates an overwhelming ratification of its constitution
Dec 5, 2022 2:45 PM