Basketball star's daughter Gianna, 13, also reported to be on board

TMZ was the first to report that Bryant's private helicopter crashed in the suburban community of Calabasas, California.

ESPN and ABC News have also confirmed the news, as has the Associated Press. 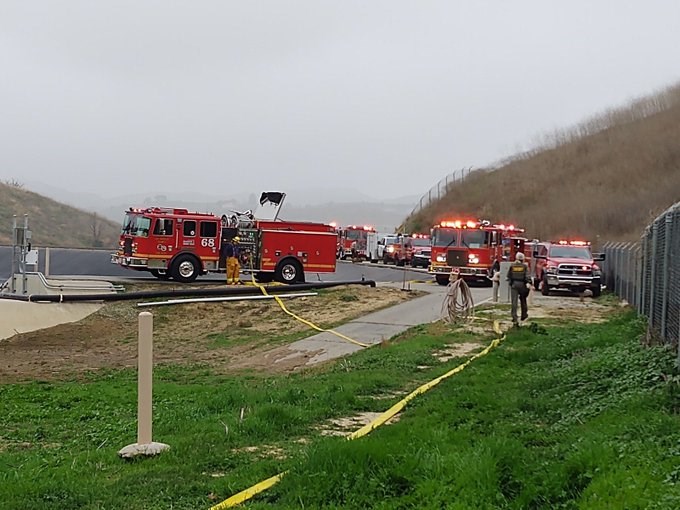 Firefighters on scene of a helicopter crash in Calabasas, Calif. on Jan. 26, 2020. Kobe Bryant is believed to be among the dead. Photo: Los Angeles County Sheriff's Department/Twitter

There were five people on board the helicopter, which went down around 10 a.m. Sunday. There were no survivors, confirm the Los Angeles County Sheriff's Department.

Avoid the area until further notice.

TMZ is also reporting that one of the other passengers was Bryant's eldest daughter Gianna, 13, was on board, and that they were traveling to Bryant's sports facility, the Mamba Academy, in the nearby community of Thousand Oaks.

As if this couldn't get worse

Kobe's daughter Gianna, has been confirmed on the helicopter, she loved basketball just as much as her Dad, and this clip of them two genuinely breaks my heart, my deepest prayers are sent to Vanessa and the entire Bryant family, I am so upset pic.twitter.com/ePgSJLozl5

The Sikorsky S-76 helicopter crashed under unknown circumstances, according to a spokesperson from the National Transportation Safety Board who spoke with ABC News.

"It is with great sadness that we learn of the death of Kobe Bryant and four others in a helicopter crash in Calabasas," Calabasas Mayor Alicia Weintraub said, according to NBC Los Angeles. "The aircraft went down in a remote field off Las Virgenes around 10:00 this morning. Nobody on the ground was hurt. The FAA and NTSB are investigating."

*AIRCRAFT DOWN* Battalion 5 units working a multiple fatality helicopter crash in #Calabasas the #NTSB is currently in route to this incident. @LASDHQ is on scene and assisting. This is the #Willow incident. Battalion 5 is Willow IC pic.twitter.com/j9shN0NnWY

The Associated Press notes the crash sparked a small brush fire in the area.

Bryant was 41. He had been married to his wife, Vanessa, since 2001. They had four daughters, including one born just last June.

The NBA star was last active Saturday on social media, sharing a similar message of respect to LeBron James on both Twitter and Instagram.

Continuing to move the game forward @KingJames. Much respect my brother 💪🏾 #33644

On to #2 @kingjames! Keep growing the game and charting the path for the next. 💪🏾

The L.A. County Sheriff's Department is expected to hold a press conference at 2 p.m. today.

With additional reporting by Lindsay William-Ross

About the Author: Bob Kronbauer